When I first started writing, I noticed that I’d often get attacked at different stages of the process–especially when I was beginning something new. I’ve since studied spiritual attack and discovered there are many things we can do to be successful in spiritual warfare.

We’ll discuss those things on today’s episode of the Christian Habits Podcast, but I’ll also include the information below in case you don’t have time to listen to the podcast.

Examples of Spiritual Attack in the Bible

There are four different stories in the Bible about Satan influencing or interacting with people.We’ll go into these more in depth on the podcast, but I’ve listed the Scripture passages below so you can read these on your own.

There are two different types of spiritual attack shown in the Bible–a physical attack and an attack of the mind. Here are examples of each:

What can we learn from people who were attacked in the Bible?

How to Fight Spiritual Attack

One last thing I’d say is that not all temptations and struggles come from Satan. In my Bible study Rally, I list all kinds of reasons for trials and temptations. That said, we don’t really need to know where the struggle is coming from because the solution is the same regardless. Go to God for help. That’s something we can all do. Check out the resources below the following image for some Bible studies that will help, plus you can check out the Bible study tab at the top of this blog for printable Bible studies. 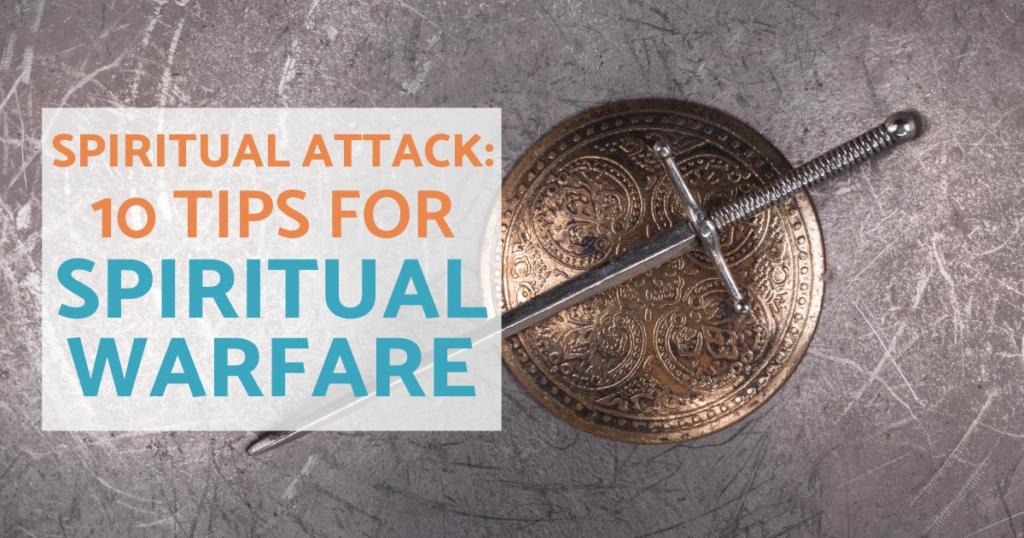 Spiritual Warfare Resources We Talked About on the Podcast:

How to Listen to the Podcast

2 Corinthians 10:3-5 (ESV) For though we walk in the flesh, we are not waging war according to the flesh. For the weapons of our warfare are not of the flesh but have divine power to destroy strongholds. We destroy arguments and every lofty opinion raised against the knowledge of God, and take every thought captive to obey Christ

James 4:7 (ESV) Submit yourselves therefore to God. Resist the devil, and he will flee from you.

1 Peter 5:8-9(ESV) Be sober-minded; be watchful. Your adversary the devil prowls around like a roaring lion, seeking someone to devour. Resist him, firm in your faith, knowing that the same kinds of suffering are being experienced by your brotherhood throughout the world.
Revelations 12: 10(ESV) And I heard a loud voice in heaven, saying, “Now the salvation and the power and the kingdom of our God and the authority of his Christ have come, for the accuser of our brothers has been thrown down, who accuses them day and night before our God.

John 8:44(ESV) You are of your father the devil, and your will is to do your father’s desires. He was a murderer from the beginning, and has nothing to do with the truth, because there is no truth in him. When he lies, he speaks out of his own character, for he is a liar and the father of lies.

2 Corinthians 11:3 (ESV) But I am afraid that as the serpent deceived Eve by his cunning, your thoughts will be led astray from a sincere and pure devotion to Christ.

Ephesians 6:10-18 (ESV)Finally, be strong in the Lord and in the strength of his might. Put on the whole armor of God, that you may be able to stand against the schemes of the devil. For we do not wrestle against flesh and blood, but against the rulers, against the authorities, against the cosmic powers over this present darkness, against the spiritual forces of evil in the heavenly places. Therefore take up the whole armor of God, that you may be able to withstand in the evil day, and having done all, to stand firm. Stand therefore, having fastened on the belt of truth, and having put on the breastplate of righteousness, and, as shoes for your feet, having put on the readiness given by the gospel of peace. In all circumstances take up the shield of faith, with which you can extinguish all the flaming darts of the evil one; and take the helmet of salvation, and the sword of the Spirit, which is the word of God, praying at all times in the Spirit, with all prayer and supplication. To that end, keep alert with all perseverance, making supplication for all the saints.