You are here: Home / Habits Blog Posts / 5 Questions That Will Help You Break Your Habit

That’s the way I am with wasting time on the Internet. Since it’s not a sin and it’s not frowned on by our culture, I have a hard time saying, “Enough, Barb, time to get serious about breaking that habit.” 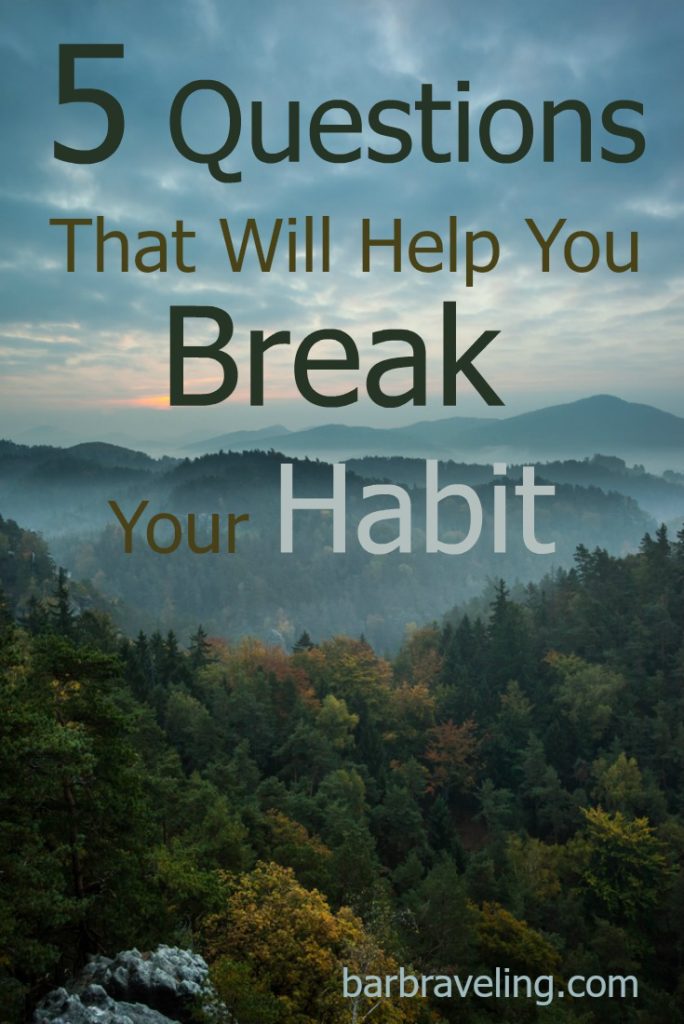 Instead, I have this vague idea in the back of my head that I should break the habit, but when it comes right down to it, in that moment of temptation, I revert to. “Just this once,” or “Is it really that big of a deal? No.”

Then I go my merry way, wasting time on the Internet again. What I’ve realized after more than a year of failure in breaking this habit is that non-sin habits that aren’t frowned on by society are tough habits to break.

So I wrote a set of questions especially for those habits. If you struggle to break your habit, whether the habit itself is a sin or not, see if these questions help. They are really convicting me. I’ll show you how I answered them below each question.

5 Questions to Help You Break Your Habit

1. Why do you feel like it’s not a big deal if you break your boundaries?

2. If you break your boundaries right now, will you be more inclined to break them later? Why or why not?

Yes, definitely. Because I’m setting a standard of saying, “I really don’t need to follow these Internet boundaries. It’s not a big deal if I break them.” When in reality, if it’s not an absolute boundary, it’s not a boundary.

3. How does this habit affect the following?

a. Your relationship with God

It hurts my relationship with God because it’s a coping technique. Rather than going to God for strength, for perspective, for comfort, and for wisdom when I’m having a problem with writing, I go to the Internet to escape my problem. When I do that consistently, it’s turning the Internet into an idol.

b. Your relationship with others

It hurts my relationship with others because it sucks up too much time. Plus I’m not as motivated to call a friend if I have a readily available form of entertainment.

c. Your maturity as a Christian

It definitely hurts my maturity because I’m not going to God for help with my trials. The more I go to Him for help, the more He controls me, and the more I’ll exhibit the fruit of the Spirit. The Internet isn’t going to take away my writing problems or my negative emotions. It’s like the golden calf as far as it’s ability to help me goes.

d. Your job and/or ministry

I won’t be able to get as much writing done if I’m constantly wasting time on the Internet. Or even if I’m not wasting time, but just using it inefficiently–checking emails once an hour rather than twice a day for example. So yes, I would say it hurts my ministry. Not to mention the fact that it keeps me out of fellowship with God which also hurts my writing.

It hurts my physical health just a little bit as I don’t move around so much. But it hurts my emotional health even more as I’m not dealing with those negative emotions. I’m just numbing them.

4. If you want to break this habit, will you eventually have to make the sacrifice to follow your boundaries all the time?

Yes. There is no way I’ll ever break it if I keep blowing off my boundaries.

5. If so, what would be the advantage of following them today?

Note: Here is a really funny thing. I just finished typing that last sentence and I heard that little “ping” that signals that I just received an email. My mind said, “Oh, I should check that email,” but then I said, “No, I can’t check that email. I have boundaries. I’ll have to wait.” Who says God doesn’t have a sense of humor?

2016 Update: Since I’ve written this blog post, I’ve written a book containing all kinds of questions like these plus Bible verses to help with breaking habits. If you’re interested in that book, click here.

Discussion: Do you have any good tips for breaking habits?