You are here: Home / Habits Blog Posts / When You’re Bombarded With Temptation

Do you ever feel like you’re constantly bombarded with temptation? I sometimes wonder if that’s how Jesus felt in the desert. I was reading about His temptation the other day in Luke 4:1-13. Here are a few lessons I learned: 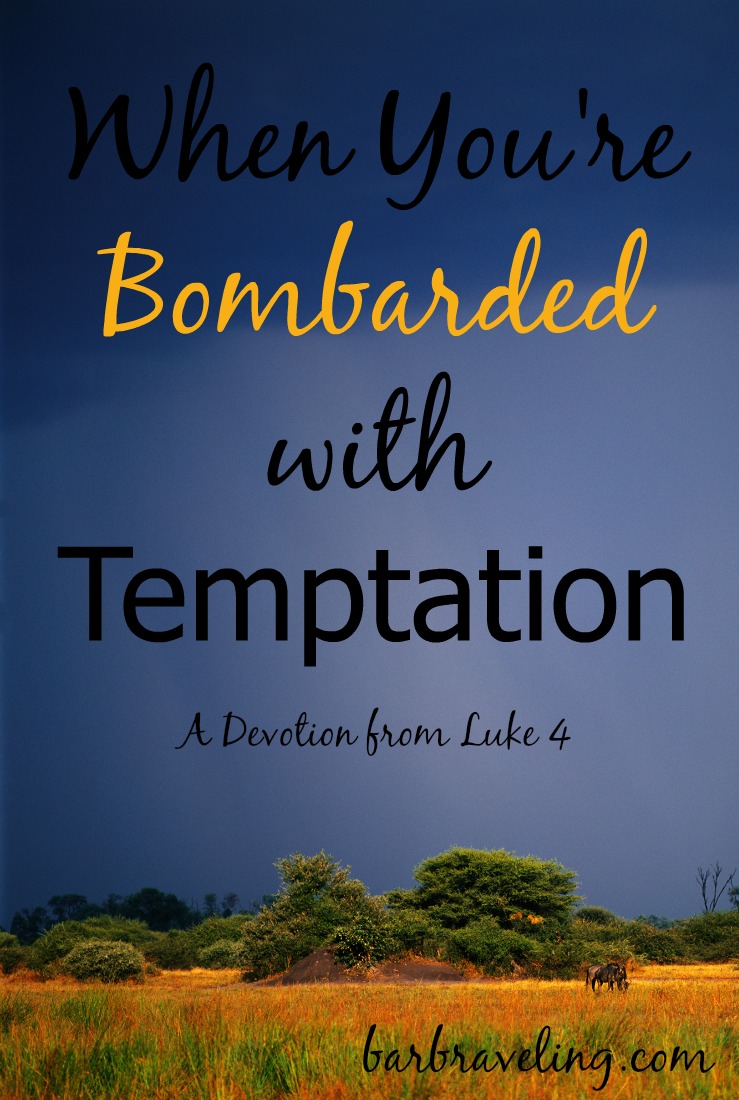 1. Expect to be tempted at the beginning of a new pursuit or a new stage of life.

It’s not surprising that Jesus was tempted right at the beginning of His public ministry. After all, Satan wasn’t crazy about His mission.

He may not be crazy about your mission, either. If he isn’t, expect opposition. Even without opposition, new endeavors can be difficult. Why? Because each time we begin something new, we get a whole new set of temptations.

In a sense, we need to learn how to live as Christians in each new stage of life. For some reason, this is comforting to me. When I began this blog, I was bombarded by temptation.

At the time I was surprised and a bit overwhelmed. But looking back, I can see that it wasn’t surprising. It was a new pursuit, with a new set of temptations. I needed to learn to live as a Christian blogger.

You may be starting college, marriage, a new job, a new goal, or a new phase of life such as retirement. Don’t beat yourself up if you’re struggling. Jesus struggled. And He was perfect.

2. Expect to be tempted at opportune times.

After Satan finished tempting Jesus, he left until an opportune time (Luke 4:13). He does the same for us.

He’ll attack during weak moments. After we’ve just failed in some way. When everything else is going wrong. Or at the end of the day or the end of a trip, when we’re tired of fighting temptation.

If we want to be victorious, we need to be prepared.

Journal Questions: Think of the day or week ahead. When will you be most tempted to give into temptation? What could you do to renew your mind right before that time?

When Jesus was tempted, He didn’t say, “Father, help me!” and then get mad when God didn’t answer His prayer. Instead, He took the initiative Himself. He entered the desert full of the Holy Spirit, and He answered each temptation with the Word of God.

That would be like us starting each day with a nice long quiet time and having Bible verses at the ready to help us fight our most common temptations.

If you think you don’t have time for all this, think about how often Jesus went off by Himself for time with God even though He was overwhelmed by people who wanted His attention.

Challenge: Make a renewing of the mind project of your biggest temptation OR (here’s a less intimidating challenge) list five lies Satan commonly feeds you. Find five Bible verses to combat those lies. Write them on index cards and carry them with you to use whenever you’re tempted.

Discussion: When are you most likely to be tempted?