You are here: Home / Anger / 15 Words That Will Change Your Relationships 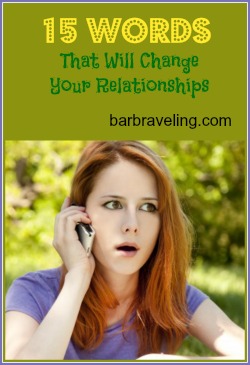 What if I told you you could get rid of 90% of your anger if you just added 15 words to your vocabulary?

Would you be all excited, madly scanning the rest of the blog to find those 15 words?

Or would you be skeptical?

If we were honest, most of us would say it’s not our fault we’re annoyed; it’s the other guy’s fault.

So unless that other guy were to get his act together, we could say a hundred words and it wouldn’t make a bit of difference. We’d still be mad at him.

Let’s see if this is true. Think about that annoying person in your life. Imagine you just got off the phone with him or her, and you’re steaming mad. Once again, he managed to be his usual inconsiderate self.

You controlled yourself on the phone (you’re the good guy after all), but now you’re mulling over his words and getting mad all over again.

I can’t believe he said that. I would never say anything like that. He is so insensitive. Why can’t he think of someone other than himself for a change? Does he think I have no feelings?  What a jerk.

Now let me ask you a question. How long did those annoying remarks on the phone last? Three minutes, maybe?

And how long did your thoughts about the annoying remarks last? A few hours maybe? A few days?

What % of the anger is your fault?

So what % of your anger is the other guy’s fault, and what % is your fault?

I’ve done this exercise in probably ten classes now, and every class comes up with the same percentages: 10% of our anger is due to the other person’s annoying behavior, and 90% of the anger is due to the amount of time we spend dwelling on the faults of that annoying person.

It that’s true, we can get rid of 90% of our anger by hanging up the phone, skipping the whole I-can’t-believe-he-did-that session,  and telling ourselves these 15 words:

That wasn’t surprising—he always says things like that. That’s just the way he is.

And then get over it.

Give him grace. Love him. Forgive him. And accept him as he is, faults and all.

Not to mention the fact that being annoyed all the time is also annoying.